Today we begin a new series of features spotlighting different characters of Eliorin, and for this first entry, we are focusing on Fulgar Geth, the resident physicker and spiritual guide aboard the Queenie. 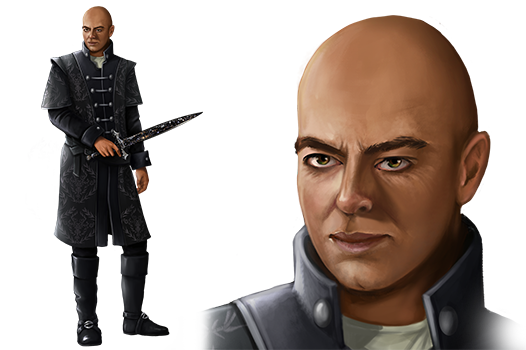 Zale meets Fulgar early on in the story under mysterious circumstances. Zale quickly finds that Fulgar knows more of the ship's business than he first lets on, but they've barely had a chance to clear the air when circumstances force the Queenie to depart from dock sooner than planned.

Fulgar quickly proves adept at his duties and then some, wielding a strange ability through his sparkling novidian anelace...an ability which drives back the power of the Void. This power, whose users are called Fielders, seems enhanced by his unique weapon, and may have something to do with his status as a member of the mysterious Order of Aether Diamond.

And while most of Eliorin's human denizens have a mix of two hair colors, those rare few skilled as Fielders and other unusual disciplines are often said to have three. For reasons unknown to many, there is a law in Tuscawny against the dyeing of one's hair. Yet it would seem that by shaving his, Fulgar Geth may just have found a loophole...but for what purpose?