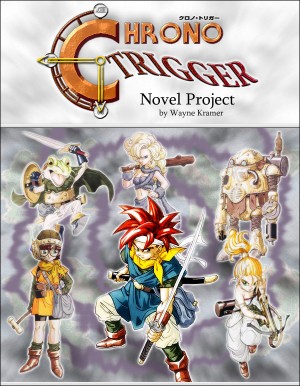 Chrono Trigger, the novel, is a full-length, epic-fantasy tale based expansively on the original game.  The novel is borne of a sheer passion and yearning to share this timeless story with generations present and future and, through that accomplishment, do it true poetic justice.

If you’ve come to this page and are unfamiliar with the story of Chrono Trigger as told through the games, you should first check out the New to Chrono Trigger page for a briefing, and then return here for a better understanding of the novel itself.

To do the story proper justice, the novel is intended to give even existing fans a completely new experience.  It’s not the game—it’s the novel.  Of course, everything familiar will be recognized, but the presentation of the story is in fact unique.  Much more is defined about the characters and their world, and a full layer of “epic” has been added to truly give this story the feel of its own distinctive fantasy world, much as you might see in other popular fantasy works.

Readers should never feel like this is a game adaptation.  It is written in the style of fantasy, inspired by series such as The Lord of the Rings, Harry Potter, A Song of Ice and Fire (A Game of Thrones), The Kingkiller Chronicle, and so forth.  Long-time fans should feel they are having a new experience, and they should expect surprises.  Readers not familiar with the game should be able to enjoy it just as much for the merits of the story.

This summary information provides an interesting and cursory glance at current and planned aspects of the novel series.  The information here is preliminary and subject to change at any time.

Strictly speaking, this puts the novel on the somewhat longer side.  So far beta readers have not complained about this at all.  The length, in fact, is right in range with first novels of other fantasy series.  The Name of the Wind by Patrick Rothfuss is about 259,000 words and A Game of Thrones by George R.R. Martin is about 284,000 words, to name a couple of examples.

The first novel has undergone multiple rounds of beta reading.  For those of you unfamiliar, you may ask: what is a beta reader?  This is simply a person who agrees to read a novel prior to publication and provide feedback.  In this case, readers provide feedback, at a minimum, via a questionnaire included with the novel.  Here are some beta reading fun facts and results as they pertain to the first Chrono Trigger novel:

Here is a sampling of comments that readers have provided thus far:

When it comes to expansive elements, here are but a few highlights:

Many videogames have been novelized with varying degrees of success.  Some, such as Warcraft and Hitman have even gone on to become blockbuster films and significant installments as part of an entire franchise.  This is a rather niche space within the entertainment industry worth more than a passing glance.

In creating the Chrono Trigger novel, the story has been painstakingly scribed to create an experience which can stand apart from the game.  Indeed, the novel is based on the game and encompasses the exact story from the game, but there is much more to it than that.  It has a flavor of its own which will immerse readers in a fantasy world that will feel both familiar and fresh all at once.

If you read through the Novel History page, which I’ve chronicled quite extensively for this website, you will see that I have spent the past twenty years (intermittently) perfecting game-to-book conversion through the story of Chrono Trigger.  I have found it to be an art and a skill-set all to its own, requiring no small amount of creativity, organization, and the ability to visualize dimensions of reality that were previously only implied or assumed or not even present before.

Alternatively, a less skilled or seasoned person could easily write a game-based story which ultimately will lack depth and the type of layered storytelling needed to make the narrative stand out as anything more than what it really is: a novelized version of a game.  Speaking as humbly as possible, that isn’t me.  The Chrono Trigger novel series is written to be a story that someone who has never even heard of the game could pick up and enjoy for its infused elements and themes of adventure, purpose, loveable characters, immersive fantasy world, and enticing plotline.