Founded some 800 years before the events of Murdoch's Choice by Sumu Amor, the "Tusk King," after his forces emerged victorious in a multifactional territorial war, the territory gradually expanded as he drove rival factions from his land. (One of these factions would later migrate northeast and form the nation of Korangar.) 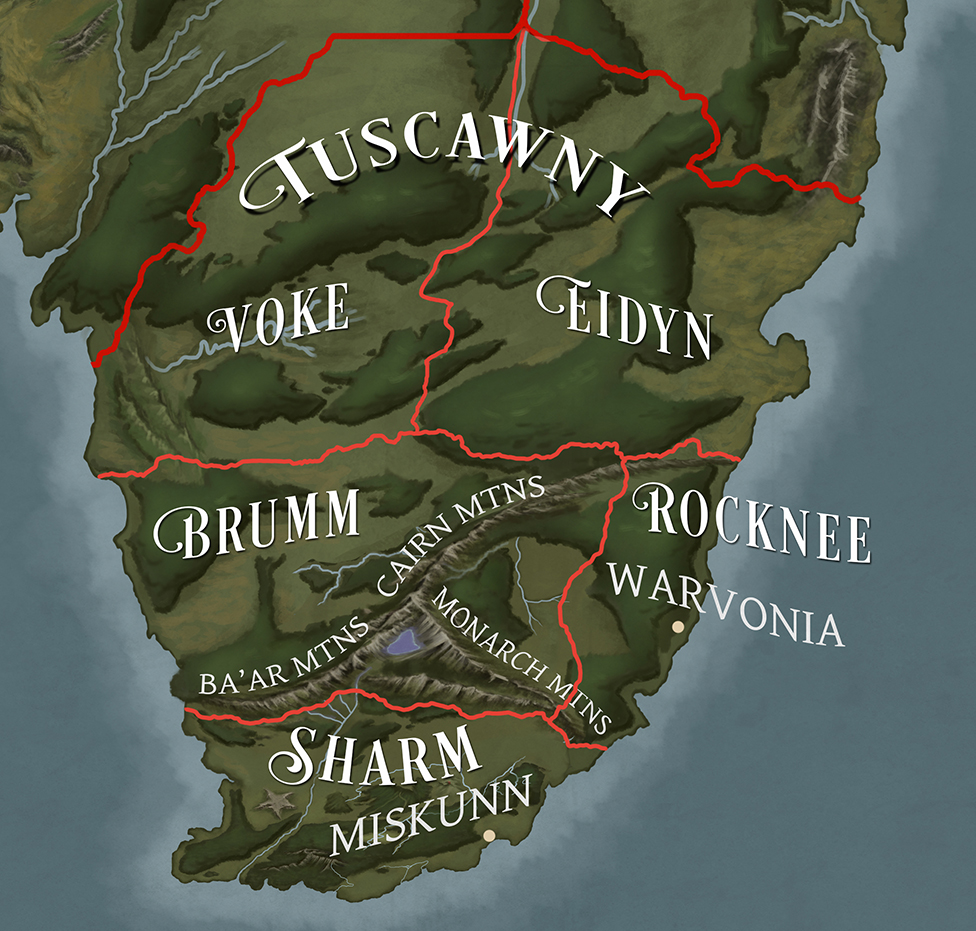 Tuscawny has always been an absolute monarchy, though with five provinces encompassing three mountain ranges and some 35,000 square miles, the land's kings have long since left most matters of governance in the hands of hand-picked barons who rule over each province. The sole exception to this is the capital baron, who presides over two provinces: Sharm and Rocknee. Sharm happens to include the capital of Miskunn; hence the title of capital baron.

The kingdom's seat of power is actually not the capital city of Miskunn, but the illustrious Metsada Palace, built on the star-shaped plateau of Alpha Makutu, visible on the map in Sharm's western reaches. Here in Metsada Palace rests the Throne of Light, which was said to be a gift from a divine being.

North of Sharm lies the province of Brumm, a sprawling land where lie the majority of the kingdom's steep and treacherous mountains. Much of the kingdom's nobility resides in this province, engaged in an endless bloody game of intrigue and backstabbing.

The province of Voke borders the neighboring nation of Holbrook. With its large size and variety of landscapes, most of Tuscawny's small population of anthropods tend to settle here. Its largest towns are located toward its southern border with the province of Brumm, while the north is dappled with various military outposts for keeping watch on the border with Holbrook. Tuscawny's Royal Guard has been known to travel and camp throughout Voke as part of knighthood training.

The province of Eidyn is most famously known for the unique dialect its citizens tend to have (akin to what we would recognize as Scottish). This is influenced by indigenous tribes of people that originally settled throughout this land of dense forests and into what would later become the nation of Korangar. Between these thick woodlands are various gates, walls, and checkpoints along the border between Tuscawny and Korangar. During the days of the past Foundational War, the Tusk King Sumu Amor recruited a large number of followers from this area to form his army, and they played a large role in his victory over Phos Kataneo for the Throne of Light. Despite this scattering, over time most of these people migrated back toward their homeland, and Sumu Amor established this province to appease them and secure their continued loyalty along the new kingdom's border.